« Into the West
In Dublin’s Fair City »

Through Arlo I met many musicians, but more importantly, I had the chance to see them work. They inspired me to devote my life to playing music.

One of my first “Professional Engagements” (I had to sign a contract!) was a Danish production of Brendan Behan’s play, “The Hostage”.

John Faulkner, now of Galway – then of London, had been asked to suggest some musicians and he put my name forward. The flute player chosen was a great friend of mine from Moyasta in Co. Clare, P.J. Crotty, so the two of us headed off on a six month adventure together. We had an apartment in the middle of Copenhagen where we stayed when we were not travelling throughout Denmark. “Det Danske Teater” (The Danish Theatre) is a National Theatre situated in Copenhagen but it also brings its major productions to all parts of the country. We discovered that life in Denmark was very different from what we were used to! 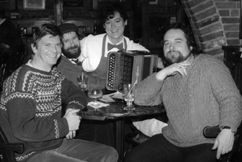 The language was strange to our ears and difficult (this was a problem because the play was in Danish! We had to learn all our cues in Danish! Luckily, I was very familiar with the play so in the early days I was able to get some of the cues from the action of the play itself); the food was strange and difficult – pickled fish, raw eggs, smelly cheese (Esrom); the weather was colder than we had ever imagined cold could be (we arrived in mid-December) and so on. But we soon adapted. The pubs stayed open late, there was lots of great music (mainly jazz) and we made great friends there.

At first the rehearsals were very difficult because there was disagreement on how the music should sound. We tried to play as we were asked but we knew it didn’t sound right. There were some tense discussions between the Director, the Cast and the Administration which we couldn’t really follow because of our inability to speak Danish but we knew there were problems! Finally we were asked for our opinions and a day or two later the Director and his assistant were fired (we presumed it was because of what we had said!). 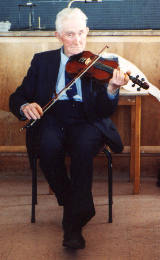 We were asked to re-fashion the music to something more traditional and, in an unexpected development, PJ became the Choreographer. One day during a break he was showing some of the actors how to dance a Set. In an impromptu demonstration, he danced around the stage using a chair as his “dancing partner”. Several of the actors clapped and cheered as he danced with his chair and before long he had taught them all a few steps. Eventually the Set was incorporated into the play as one of the opening scenes – and every night PJ got to dance with his chair!