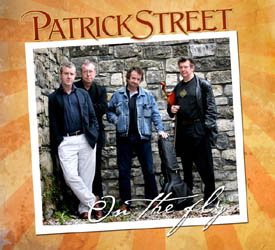 ON THE FLY is the new album from celebrated traditional Irish band PATRICK STREET, on Loftus Music. Now in their third decade, Patrick Street are considered “the Irish supergroup” with musical heritages dating straight back to The Bothy Band, Planxty and De Dannan. The new CD indicates the opening of an exciting new chapter for the group, as well as a change in one of its longest-running line-ups. Renowned accordion player and founding member Jackie Daly has decided to step down from the “Street,” and leaves us with some dynamic playing on the album. Meanwhile, respected multi-instrumentalist and newest member John Carty makes his Patrick Street recording debut.

On the Fly is the band’s eleventh release and perhaps the most profoundly traditional, with many of the tunes rooted in the rural music of County Sligo. Both John Carty and Kevin Burke spent their early years there, soaking up music that the wider world learned mainly from recordings. Now considered two of the finest fiddlers of their generations, they team up here for some thrilling sets of tunes. John’s imaginative phrasing and Kevin’s silky tone joyfully portray the rhythmic ebb and flow of the swift, rolling Sligo music on which they were raised.