« In the Beginning
Misspent Youth? »

Jessie Christopherson was giving me Violin lessons and at the same time I was learning about the Fiddle at home from my parents’ record collection and from family friends. Most of the musicians I was hearing at home played ‘by ear’ and Jessie was teaching me to read so, to combine the two skills, we thought it would be a good idea to bring Jessie a few Irish tune books and let her take me through them. She was quite happy to do so and before long I had learned several fiddle tunes at my violin lessons. But there was a problem – they sounded strange! And not just because I was a beginner! So we brought Jessie up to the house and played her some recordings of Irish music and asked her why they sounded so different from what I was playing. She explained that what was written in the books was very different from what we were hearing. This was a revelation! I realized that “don’t believe everything you read” does not only apply to newspapers! So, how do you make written notes spring to life and become sounds that could justifiably be called music? This became “the Quest”. 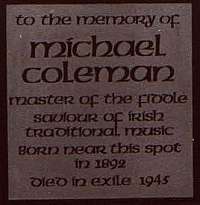 I discovered that Irish players had many ways of ornamenting the notes of a tune and that these were often left out of the books. In Jessie’s lessons I had learned that I should play just what is written down – no more, no less. From the Irish players I learned to treat the printed page simply as a guide and to add grace notes and triplets more or less when I felt like it! They also had a list of terms that I hadn’t heard in my Violin classes – shakes, rolls, crans, to name a few and there were other odd words I heard them use quite a bit, strange words like “The Nyaah” and “Corfibbles”. “The Nyaah”, apparently, was very important. Nobody seemed to be clear on what it was but all the good players had it and you were no good without it! This was very tricky. Where would I get “The Nyaah”? Where would I find it? Well, some of the older musicians advised me and encouraged me that when playing I should “lean on it” and “give it stick”. I was told to “twist it and turn it” (and “kick it down the hall” said someone else.) All this was a long way from the language Jessie used when talking about music. But it was helping. I knew I was gradually playing better when one day I heard some old lad say “He has the Nyaah!” I didn’t know what it was, I didn’t know I had it, I didn’t know where I had found it, but I believed him!

One of the things which Jessie said that stuck in my mind was about Michael Coleman. We had played her several recordings of great players to listen to but she singled him out and told me “He finds the soul of his instrument”. Nobody had ever told me before that musical instruments even had souls! That was an exciting bit of news – another revelation!