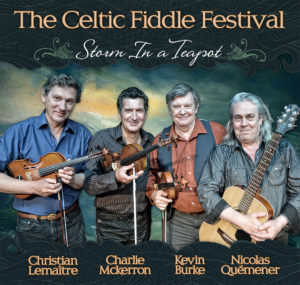 The latest Celtic Fiddle Festival CD, “Storm in a Teapot”, features a new fiddler in the group, Charlie McKerron, the wonderful musician from Capercaillie, one of Scotland’s most renowned and revered bands. The CD showcases some Galician pieces as well as tunes from Brittany and Ireland and also highlights the Scottish music that Charlie’s inclusion has brought to the band. Many will remember that the Celtic Fiddle Festival’s original line-up featured another much loved Scot, the irrepressible Johnny Cunningham. Johnny’s passing was a painfully sad blow to the band but, more than a decade later, the group are delighted to revisit the vast treasure trove of Scottish music that used to be such an integral part of the Celtic Fiddle Festival’s repertoire.

In January 2016, after an appearance at Glasgow’s “Celtic Connections” festival , the band extended their visit to Scotland by setting off to TPot Studio, nestled in the rolling hills of rural Perthshire. Charlie, Christian, Kevin and Nicolas made themselves comfortable inside the studio and, while the wind, rain and snow storms raged outside (and inspired the title of the CD), they set about choosing the repertoire, building the arrangements and making the music that can be heard on the “Storm in a Teapot”.

With the always engaging guitar accompaniment of Nicolas Quemener, “Storm in a Teapot” is a collection of traditional and contemporary music ranging from light hearted, vigorous dance tunes to heartachingly soulful airs – another milestone in the long history of The Celtic Fiddle Festival which spans more than two decades of inspired and inspiring fiddle music. .

Individual tracks can be downloaded from Loftus Music: