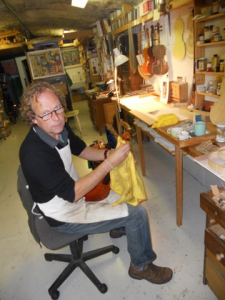 I now play an instrument made by Michiel (Mick) De Hoog.

Mick is a Dutchman who has been living in Dublin for many years. In 2000 I realized that my old fiddle was becoming more and more unstable and despite several repairs it was no longer fit for the rigours of the road. I went to see my fiddle maker friend Mick to see if he had anything that might suit me and, sure enough, he was just finishing an instrument which I played and fell in love with immediately. Since then I have played it almost exclusively but I still have that old fiddle that I got from Tony Martin years ago in London and I also have an instrument made by Jeff Manthos of Oregon which I play occasionally

I usually use Obligato strings, made by Pirastro

For amplification purposes I use an MBC-603 condenser microphone on a stand. I also have a Kurmann Soundpost pick-up (manufactured in Switzerland by Ronnie Arber Audiotechnik, Edisonstrasse 7, CH-4053 Basel) which I sometimes use in conjunction with the microphone.

In the year 2000 my brother, Noel, a highly renowned bowmaker, gave me one of his bows as a present for my 50th birthday. Since then I have used it almost exclusively. Noel lives in Carlow, Ireland. www.burkebows.com 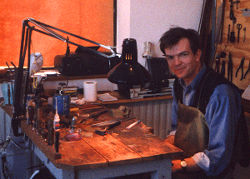 I use rosin made by Gustave Bernadel.

And I carry all this in a “Maurizio Riboni” case from Cremona, Italy.